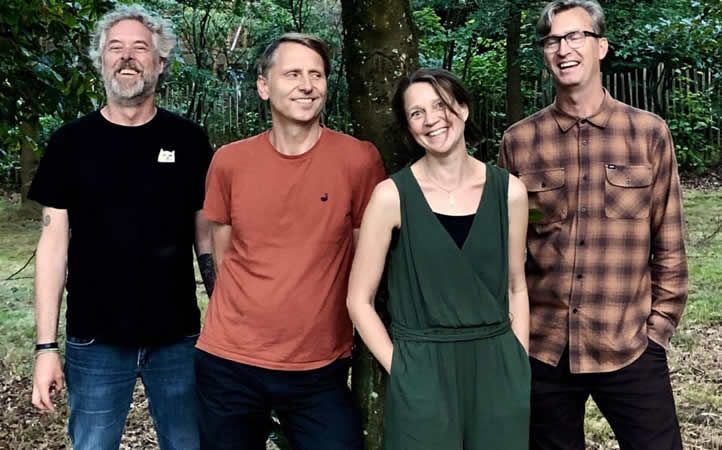 Before HOWRAH became this awesome, self-reliant entity, each member had an absence that needed to be filled. Duivenvoorde and Turba once formed the great rhythm tandem of Space Siren, a band driven by the headstrong spirit of Corno Zwetsloot (who passed away in 2014). Loots, known for being that quintessential glue guy in a number of great Amsterdam bands, kept plugging away after burgeoning outfit Bombay became defunct. And Van Appeldoorn – who once captained Zoppo – didn’t even play in a band for over five years. In HOWRAH, the chemistry between Turba and Duivenvoorde remains sharp as a tack, vital and alive. But Van Appeldoorn’s singular songwriting is what propels this band forward. Instead of writing songs with a fully formed vision, the musician pens his melodies and lyrics piece-by-piece, brick-by-brick. ‘This Chemistry’, the aptly-titled opening cut, feels like a suspenseful &amp; tenuous crossing over a bridge, with deadly currents raging underneath. The bass and drums form a steady momentum-building pulse, as Van Appeldoorn’s buzzsaw guitar neurotically staggers and quivers on the surface. Almost like an earthly calm, Loots’ ethereal melody gives the music an almost weightless aura, like an unseen force pulling you across an abyss.

That’s one helluva way to start an album. And across the nine tracks that follow, HOWRAH continue to relish in their most visceral impulses, albeit measured and bottled up. If years of musical experience and artistic forays teach you something, it’s to land on your feet. And that’s exactly what makes HOWRAH’s work tick. Obsessions, compulsions, attractions and inner quirks are avidly explored. ‘More Than Meets The Eye’ jumps from the canvas like a fanfare playing, settling for supple funky cadence to alleviate some of those primal screams. You can move to it like a disco track, and it’s cadence is a funnel for profound hopes, desires and fears. Like a fifth limb, being in a band can allow a person to carry themselves within society’s more rigid structures.

Indeed, HOWRAH have found a healthy balance between the letting go and the pushing towards. Which isn’t to say they don’t peer over the edge every now and then. First single ‘Vacuity’, with its sinister guitar attack and stabbing synth flourishes, shows the band at their most obtuse and menacing. Gravity will undoubtedly pull you back down into earth. But to pinpoint that instant of weightlessness at the peak of your leap is a high one can only replicate with sheer bravery. HOWRAH nourish that high and stretch it out into their Self-Serving Strategies. Like your own heart, this music will skip a beat just to tell you want you’ve been missing.